Every year, the goal of Bullet Point Reading is to read 52 books, one a week, and share the noteworthy findings.

What are the overlapping ideas that span multiple books, across a variety of genres?

That’s what we are looking at today.

All books are further linked to Goodreads, Amazon and the full takeaways. 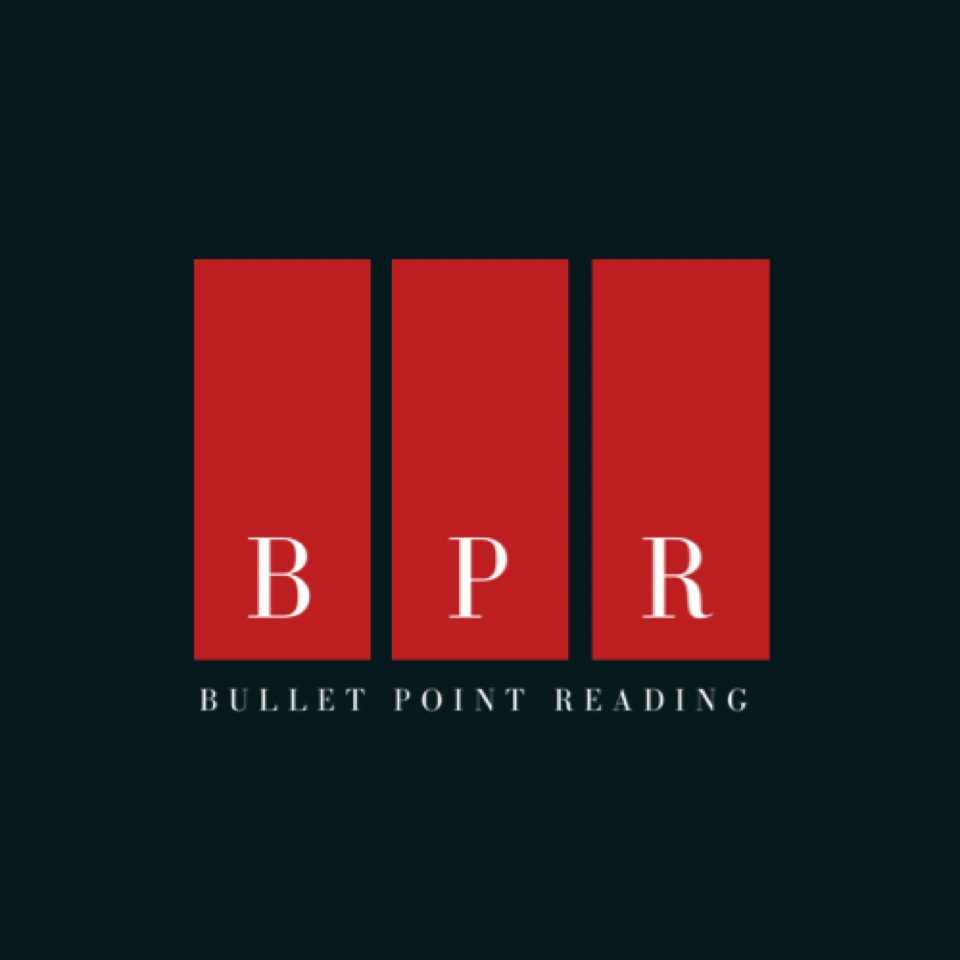 This year can be broken down into these categories:

“All benefits in life come from compound interest, whether in money, relationships, love, health, activities, or habits.” The Almanack Of Naval Ravikant By Eric Jorgensen

“Compounding works best when you can give a plan years or decades to grow. This is true for not only savings but careers and relationships. Endurance is key. And when you consider our tendency to change who we are over time, balance at every point in your life becomes a strategy to avoid future regret and encourage endurance.” The Psychology Of Money By Morgan Housel

“All big things come from small beginnings. The seed of every habit is a single, tiny decision. But as that decision is repeated, a habit sprouts and grows stronger. Roots entrench themselves and branches grow. The task of breaking a bad habit is like uprooting a powerful oak within us. And the task of building a good habit is like cultivating a delicate flower one day at a time.” Atomic Habits By James Clear

“Hard work is like compound interest at the bank. The rewards build faster.” The Last Lecture By Randy Pausch

AGING AND STARTING SOMETHING NEW:

“As you grow, you learn more. If you stayed at twenty-two, you’d always be as ignorant as you were at twenty-two. Aging is not just decay, it’s growth. It’s more than the negative that you’re going to die, it’s also the positive that you understand you’re going to die, and that you live a better life because of it.” Tuesday’s With Morrie By Mitch Albom

“Don’t assume that it’s too late to get involved.” Tuesday’s With Morrie By Mitch Albom

“Be brave enough to be bad at something new.” -Jon Acuff, Finish

“It is impossible for the old not to envy the young. But the issue is to accept who you are and revel in that. You have to find what’s good and true and beautiful in your life as it is now.” Tuesday’s With Morrie By Mitch Albom •

“A man is not old until regrets take the place of dreams.” -Gene Fowler We Own This City By Justin Fenton

“Inspiration is perishable. When you have inspiration, act on it right then and there.” The Almanack Of Naval Ravikant By Eric Jorgensen

“Professionals stick to the schedule; amateurs let life get in the way.” Atomic Habits By James Clear

“Change is an inevitable part of life. The seasons change, our feelings change, our appearance will change, and our health will change. Life is easier when we accept these changes and recognizes how every moment of our journey is an important part of the growth of our soul.” The Soul Of A Butterfly By Muhammad Ali

“Observe constantly that all things take place by change, and accustom yourself to consider that the nature of the universe loves nothing so much as to change things which are and to make new things like them.” Meditations By Marcus Aurelius

“No one in the world is going to beat you at being you.” The Almanack Of Naval Ravikant By Eric Jorgensen.

“Your identity emerges out of your habits. Every action is a vote for the type of person you wish to become.” Atomic Habits By James Clear

“All your actions, feelings, and behaviors —even your abilities—are always consistent with your self image. You will “act like” the sort of person you conceive yourself to be.” The Psychology Of Money By Morgan Housel

“Happiness and freedom begin with a clear understanding of one principle: Some things are within our control, and some things are not.” Epictetus

“Research shows that we cause ourselves more emotional pain and suffering when we rail against situations and people that are beyond our control.” Logged In And Stressed Out By Paula Durlofsky.

“You always own the option of having no opinion. There is never any need to get worked up or to trouble your soul about things you can’t control. These things are not asking to be judged by you. Leave them alone.” Meditations By Marcus Aurelius

“Don’t lie about it. You made a mistake. Admit it and move on. Just don’t do it again. Ever.” Kitchen Confidential By Anthony Bourdain

“When you are impeccable, you take responsibility for your actions, but you do not judge or blame yourself.” The Four Agreements By Miguel Ruiz

“There are two types of people in the world: those who do what they say they’re going to do— and everyone else.”

“If it feels bad, it is probably wrong.” Incognito By David Eagleman

“If it is not right, do not do it: if it is not true, do not say it.” Meditations By Marcus Aurelius

“Our perceptions of the world offer us not a literal transcription of reality but rather a seamless illusion woven from both the data of our senses and the models in our memories. Normal waking consciousness feels perfectly transparent, and yet it is less a window on reality than the product of our imaginations – a kind of controlled hallucination.” How To Change Your Mind By Michael Pollan

“A happy person isn’t someone who’s happy all the time. It’s someone who effortlessly interprets events in such a way that they don’t lose their innate peace.” The Almanack Of Naval Ravikant By Eric Jorgensen

“The number one thing clouding us from being able to see reality is we have preconceived notions of the way it should be.“ We train our brains. In the end, it is your mind that translates the outside world into happiness or misery.“ -Matthieu Ricard Think Like A Monk By Jay Shetty

“There is no stress in this world. Only stressful thoughts.” -Wayne Dyer Stop Checking Your Likes By Susie Moore

“Everything we hear is an opinion, not a fact. Everything we see is a perspective, not the truth.“ -Marcus Aurelius

“Emotionally we have many problems, but these problems are not actual problems; they are something created; they are problems pointed out by our self-centered ideas or views.” Zen Mind, Beginner’s Mind By Shunryu Suzuki

“The happiness of your life depends upon the quality of your thoughts.” Meditations By Marcus Aurelius

BE UNDENIABLE AT YOUR CRAFT:

“Become the best in the world at what you do. Keep redefining what you do until this is true.” The 4-Hour Workweek By Timothy Ferriss

“Be a maker who makes something interesting people want. Show your craft, practice your craft, and the right people will eventually find you.”

“You should focus relentlessly on something you’re good at doing, but before that you must think hard about whether it will be valuable in the future.” Zero To One By Peter Thiel

“Spending too much time focused on others’ strengths leaves us feeling weak. Focusing on our own strength is what, in fact, makes us strong.” -Simon Sinek

“It is far more lucrative and fun to leverage your strengths instead of attempting to fix all the chinks in your armor.” The 4-Hour Workweek By Timothy Ferriss

”Focus on being productive instead of busy.” The 4-Hour Workweek By Timothy Ferriss Input doesn’t necessarily equal output.

“Your actions reveal how badly you want something. If you keep saying something is a priority but you never act on it, then you don’t really want it. It’s time to have an honest conversation with yourself. Your actions reveal your true motivations.”

“You must have the courage to act, for only by actions can goals, desires, and beliefs be translated into realities.” Psycho-Cybernetics By Maxwell Maltz

“If others say one thing, but do another, you are lying to yourself if you don’t listen to their actions. But if you are truthful with yourself, you will save yourself a lot of emotional pain.” The Four Agreements By Miguel Ruiz

“Avoid pronouncing the phrases everyone else does. Think up your own way of speaking, even if only to convey that thing you think everyone else is saying.” On Tyranny By Timothy Snyder

“When you listen to someone, you should give up all your preconceived ideas and your subjective opinions; you should just listen to him, you observe what his way is.” Zen Mind, Beginner’s Mind By Shunryu Suzuki

“We have two ears and one mouth and we should use them proportionally.” Quiet By Susan Cain

“Accustom yourself to attend carefully to what is said by another, and as much as it is possible, be in the speakers mind.” Meditations By Marcus Aurelius

“I hope whatever you’re doing, you’re stopping now and then, and, not doing it at all.” -James Fadiman How To Change Your Mind By Michael Pollan

“Stay true to your own nature. If you like to do things in a slow and steady way, don’t let others make you feel as if you have to race. If you enjoy depth, don’t force yourself to seek breadth. If you prefer single-tasking to multi-tasking, stick to your guns. Being relatively unmoved by rewards gives you the incalculable power to go your own way.” Quiet By Susan Cain

“What if mood is a choice?” A Really Good Day By Ayelet Waldman

“You can’t be anything you want. But you can be everything you are.” Think Like A Monk By Jay Shetty

”If you can’t explain something simply, you don’t understand it well enough.” -Albert Einstein

If you made it this far, thank you for taking the time to read! I hope you find some benefit in this.

View all posts by Duke Dahl